Using a Cloudbit as a timer with IFTTT?

My wife and I make tea A LOT. And we always let it steep for about 4 minutes. I’d like to use some bits to create a one-button countdown timer to let us know when to stop steeping, but I’m having a difficult time figuring out just how to do it.

Closest I’ve been able to get so far is a recipe that creates a Google Calendar event when I push the button. Unfortunately, the event gets created as soon as the button is pressed and not for 4 minutes into the future! It appears Google Calendar Quick Add doesn’t support commands such as “Remind me to get tea in 4 minutes” (it interprets that as “Create an event NOW that lasts 4 minutes”). And since that doesn’t work, I can’t even get started on a recipe that will trigger the buzzer.

I’ve gone to IFTTT and connected it to my Cloudbit. So we’re good there. But it doesn’t seem like any of the other recipes will work. Totally stumped. Do I need an Arduino bit for this?

Hi @eriksr, I had the same thought but want to use a servo motor to lift the bag out after four minutes! Great minds…

On Quora, I found this, and will experiment with the “numerous” channel on IFTTT. If you get to it before I do, please report to us!

“Hans Andersson, I’m an attorney at Fenwick & West LLP with a background in software engineering.
148 Views
Connect your IFTTT account to Numerous, then use Numerous countdown numbers and trigger actions after a certain amount of time has passed on the countdown numbers. Note, however, that if you use the triggers that watch for a certain amount of time before or after a Numerous countdown event has occurred, the recipes will get triggered by polling (rather than pushing), which means you may see a difference of up to 15 minutes between the before/after time you specified and the triggering of the recipe.”

Hey @Thingfully , thanks for the response!

So Numerous doesn’t have a countdown timer function – it can be set to count down to a specific day or time of day. But it cannot, say, automatically create a timer now that ends in 4 minutes.

Also mucked about elsewhere on that Quora response and found the fellow who connected Zapier (similar to IFTTT) and IFTTT together with a very, very convoluted Google Docs Spreadsheet and RSS and…frankly my head started to spin, and I don’t think it was going where I needed it to go anyway.

I’ve been working on this most of today and I’m getting the sense that it isn’t possible without using the Timeout bit or an Arduino. Which is crazy-pants considering the Cloudbit is itself a computer! No idea how to program it, though. A task for another day.

I will set my 15-year-old son onto it because his approach to interoperability is not hampered by details. Will report back any progress.

I do find that IFTTT’s refresh time can cause all kinds of lags.

How about @RichB’s Arduino bit timer? 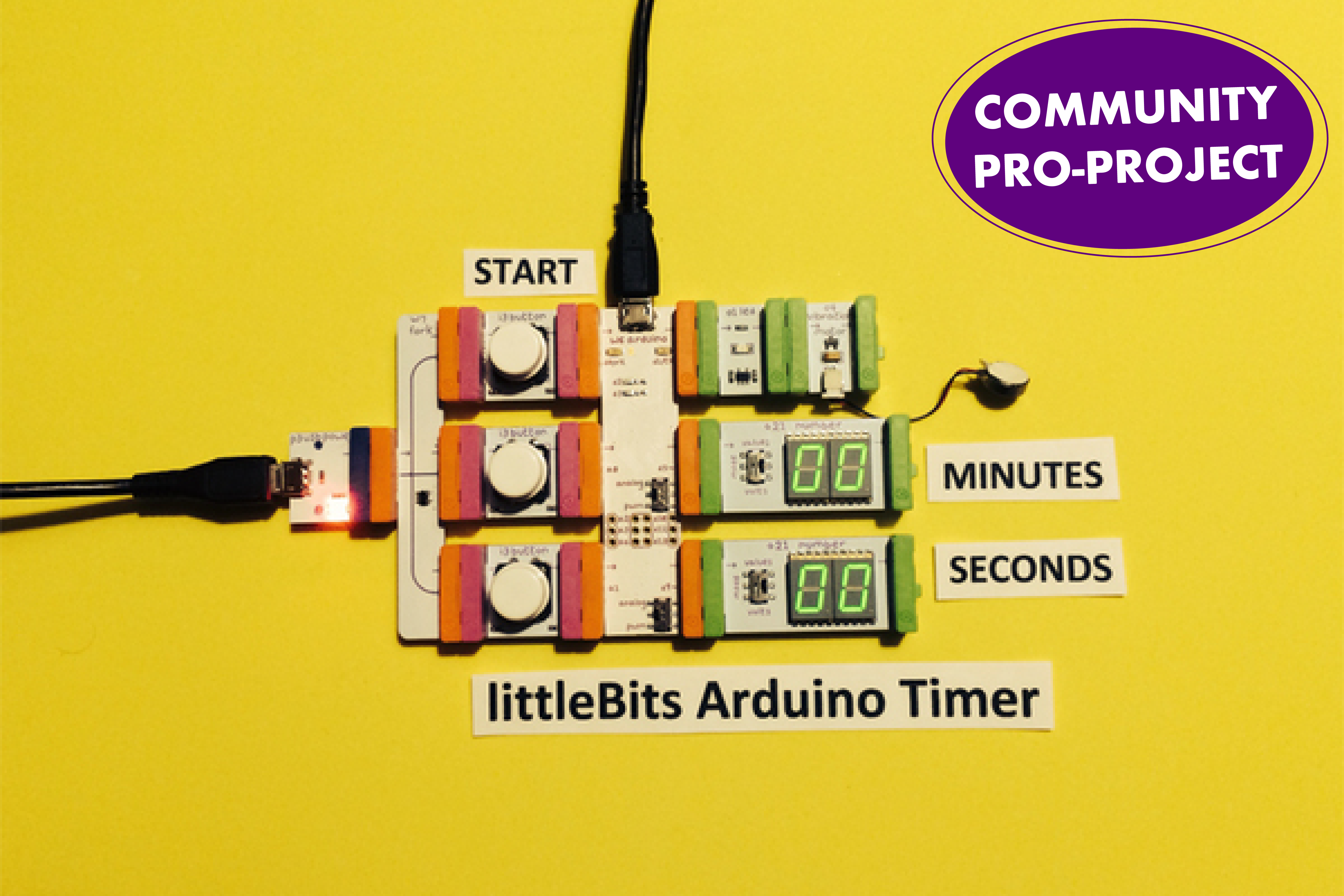 Would you like to make sure that you don't oversleep that 20 minute afternoon nap? Or maybe you need to time some eggs that you are boiling.  You can do these things, and much more, easily with the littleBits Timer.  This timer will...